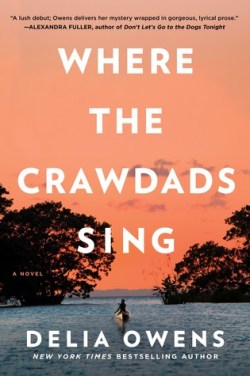 Fans of Barbara Kingsolver will love this stunning debut novel from a New York Times bestselling nature writer, about an unforgettable young woman determined to make her way in the wilds of North Carolina, and the two men that will break her isolation open.

For years, rumors of the “Marsh Girl” have haunted Barkley Cove, a quiet town on the North Carolina coast. She’s barefoot and wild; unfit for polite society. So in late 1969, when handsome Chase Andrews is found dead, the locals immediately suspect Kya Clark.

But Kya is not what they say. Abandoned at age ten, she has survived on her own in the marsh that she calls home. A born naturalist with just one day of school, she takes life lessons from the land, learning from the false signals of fireflies the real way of this world. But while she could have lived in solitude forever, the time comes when she yearns to be touched and loved. Drawn to two young men from town, who are each intrigued by her wild beauty, Kya opens herself to a new and startling world–until the unthinkable happens.

In Where the Crawdads Sing, Owens juxtaposes an exquisite ode to the natural world against a heartbreaking coming of age story and a surprising murder investigation. Thought-provoking, wise, and deeply moving, Owens’s debut novel reminds us that we are forever shaped by the children we once were, and that we are all subject to the beautiful and violent secrets that nature keeps.

I follow Reese Witherspoon’s book club (Hello Sunshine) and occasionally I’ll read whatever she’s picked for the month if it sounds appealing, and I’m so happy I did!

Kya was such a strong, independent, and tough. Because WHO ABANDONS A 10 YEAR OLD? My heart was crumbling watching her youth be shattered by callous individuals. In her entire life, Jumpin’ remained her only steadfast friend. Family and “friends” flowed in and out like the marsh, as was convenient for them. She spends most of the book reverting back to this childlike state thinking her Ma is eventually coming home. The shame and anguish she feels forces a lot of anxiety and anger to bubble up. Even when she says she’s perfectly fine being alone.

This coming of age story really resounded when she met her first love, Tate. He’s such a sweetheart and their first official meeting with the feathers was precious. And while he made some mistakes with Kya (I may have said “what a jerk” a time or two), his sould always knew where home was.

Chase on the other hand could have been dropped from that fire tower and it still wouldn’t be enough. It was hard, hard to get through this section. Kya is naive in thoughts of love and intimacy and is taken advantage of in the worst ways.

The chapters with the Sheriff and Doctor as the POV were a bit silly. The dialogue wasn’t strong enough. They just flitted in and out til the official trial.

There’s a lot of poetry in here that strongly pertains to the story. The final poem especially had me. This mystery is finally solved. It was a twist for me and hopefully it’ll be for you!

3 thoughts on “Review: Where the Crawdads Sing by Delia Owens”