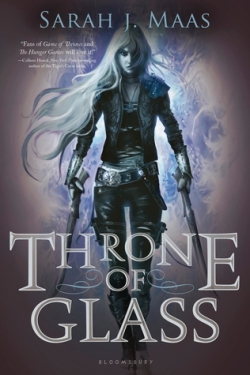 When magic has gone from the world, and a vicious king rules from his throne of glass, an assassin comes to the castle. She does not come to kill, but to win her freedom. If she can defeat twenty-three killers, thieves, and warriors in a competition to find the greatest assassin in the land, she will become the King’s Champion and be released from prison.

Her name is Celaena Sardothien.

The Crown Prince will provoke her. The Captain of the Guard will protect her.

And a princess from a foreign land will become the one thing Celaena never thought she’d have again: a friend.

But something evil dwells in the castle—and it’s there to kill. When her competitors start dying, horribly, one by one, Celaena’s fight for freedom becomes a fight for survival—and a desperate quest to root out the source of the evil before it destroys her world.

Note: Review may contain spoilers. I have read this series 3 or 4 times. I have no chill over this series. This is a re-read I’m doing specifically before KoA comes out in October.

AND SO THE STORY BEGINS.

Guys, totes forgot she dated Dorain for a bit there, haha. And he LOVED HER. That fact broke me a bit too. All he wanted was someone to really love. But it was clear Calaena never felt the same way.

The anger Calaena feels throughout this entire book makes you wanna tear down the walls at Endovier herself. I’m grateful that having her two [boy] friends by her side helped her begin to heal.

Chaol is currently so tender, I was all team him at first. Dorian and Calaena were never going  to stay together. We all know SJM adds a few lovers in before they settle on the perfect mate (real life, no?).

I tried to pay a lot more attention to Queen Elena, and the Wyrdkeys, etc. Since, Aelin is in her own world of trouble I want to make sure I’ve gathered all of the facts before SJM drops a bomb on my soul.

Some language (with a salty assassin on hand, this is true through all of the books), definitely violence, again, assassin y’all. Some love-y scenes, but nothing crazy. She wrote this first book I believe in her teens, so this was before the loooove scenes a la ACOMAF/EoS.