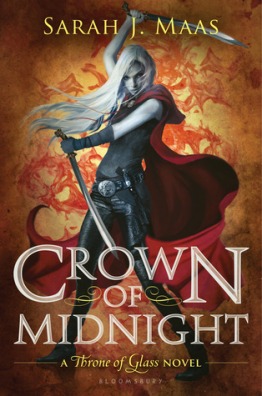 From the throne of glass rules a king with a fist of iron and a soul as black as pitch. Assassin Celaena Sardothien won a brutal contest to become his Champion. Yet Celaena is far from loyal to the crown. She hides her secret vigilantly; she knows that the man she serves is bent on evil.

Keeping up the deadly charade becomes increasingly difficult when Celaena realizes she is not the only one seeking justice. As she tries to untangle the mysteries buried deep within the glass castle, her closest relationships suffer. It seems no one is above questioning her allegiances—not the Crown Prince Dorian; not Chaol, the Captain of the Guard; not even her best friend, Nehemia, a foreign princess with a rebel heart.

Then one terrible night, the secrets they have all been keeping lead to an unspeakable tragedy. As Celaena’s world shatters, she will be forced to give up the very thing most precious to her and decide once and for all where her true loyalties lie… and whom she is ultimately willing to fight for.

Note: Review may contain spoilers. I have read this series 3 or 4 times. I have no chill over this series. This is a re-read I’m doing specifically before KoA comes out in October.

TALK ABOUT BREAKING SOMEONE DOWN.

I feel like everyone was hurt in this book.

Nehemia sacrificing herself for the greater good of the world, still hurts my feelings. I thought she was a cool side character and was going to play a bigger role overall.

CHAOL. Who, by the way, I pronounced as ‘coal’ rather than ‘kay-all’ for the longest time before I decided I should say his name “correctly”. I still think Coal sounds better.

He made a few too many choices towards the King, and watching Calaena claw him, also tore me up. Of course, first read, ALL TEAM CHAOL. Now reading through, I get it. She wasn’t ready for Rowan. Chaol truly helped her heal from Sam, and while it ended poorly, it added more depth to both characters.

Calaena starts to have more feelings that continue to round out her character. I continually love her sassy, sarcastic, not-give-a, attitude. She holds her own. Especially when she drops down into a warehouse and WREAKS HAVOC on those who have stolen something from her.

I think this is one of the best books in the series. You know the characters well enough to feel for everyone. The action flows really well and you continually flips pages trying to soak it all in.

Love scenes that are minor descriptive, kiss/make-out scenes. Violence, torture, and language (I do appreciate that SJM uses phrases like swore colorfully, rather than using F* words, but other language is present). I think language needs to be wielded in a way that isn’t over-bearing, but that actually encourages a scenes emotions.

2 thoughts on “Review: Crown of Midnight (Throne of Glass #2) by Sarah J. Maas”