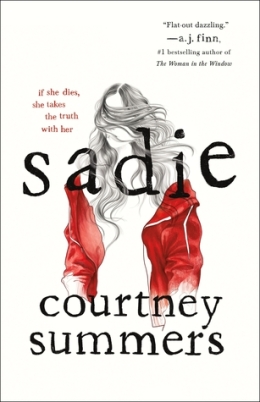 Sadie hasn’t had an easy life. Growing up on her own, she’s been raising her sister Mattie in an isolated small town, trying her best to provide a normal life and keep their heads above water.

But when Mattie is found dead, Sadie’s entire world crumbles. After a somewhat botched police investigation, Sadie is determined to bring her sister’s killer to justice and hits the road following a few meager clues to find him.

When West McCray—a radio personality working on a segment about small, forgotten towns in America—overhears Sadie’s story at a local gas station, he becomes obsessed with finding the missing girl. He starts his own podcast as he tracks Sadie’s journey, trying to figure out what happened, hoping to find her before it’s too late.

I’m not even quite sure where to begin because this book was a lot. In a horribly poignant, sad, but seriously a good book, way.

The author does a great job of withholding the fullness of the story as you go along. I read this in a handful of hours because I was completely enthralled with Sadie and her story. Mixing in the radio personality was a unique twist that allowed more character access to Sadie’s past while she was hurtling forward to her goal.

I truly sat there after I finished not knowing my feelings. They were everywhere. I was angry, confused, distraught, and wanting a different ending (I’m also not even sure what exactly happened at the ending, anyone else? AHH.) And while that sounds like I didn’t enjoy this, it’s not that at all. Summers created such a world of emotions, that while on the negative scale, was a beautifully heart-breaking well written book.

Emotional exploration was at the forefront. Struggling through the raw waves of grief, exhaustion, denial, anger, and betrayal of a young girl coping with her sister’s murder and so so much more.

The main theme is very adult, and very tough to read about. I felt panicked for Sadie the majority of the time wondering if West (the radio personality) would figure out her story fast enough to get to her. And if even Sadie herself would survive her own journey to find the killer.

“…I can’t take another dead girl.”

Overall audience notes:
– Young adult, but definitely leans towards adult
– Trigger warning themes: sexual abuse of children (throughout the entirety of the novel)
– A lot of explicit language
– Violence