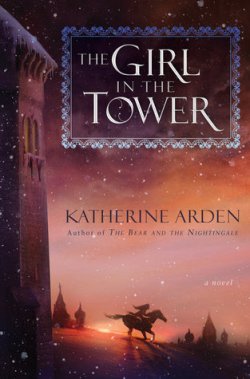 The magical adventure begun in The Bear and the Nightingale continues as brave Vasya, now a young woman, is forced to choose between marriage or life in a convent and instead flees her home—but soon finds herself called upon to help defend the city of Moscow when it comes under siege.

Orphaned and cast out as a witch by her village, Vasya’s options are few: resign herself to life in a convent, or allow her older sister to make her a match with a Moscovite prince. Both doom her to life in a tower, cut off from the vast world she longs to explore. So instead she chooses adventure, disguising herself as a boy and riding her horse into the woods. When a battle with some bandits who have been terrorizing the countryside earns her the admiration of the Grand Prince of Moscow, she must carefully guard the secret of her gender to remain in his good graces—even as she realizes his kingdom is under threat from mysterious forces only she will be able to stop.

I read the first book in this series over a year ago and remembered enjoying it, but thinking, WHOA that was a lot of story. The Girl in the Tower exceeded my expectations for a middle novel. I was able to be even more immersed in the story because I understood the characters and plot much better after The Bear and the Nightingale.

Vasya is a strong heroine. Not letting her life be put into a box of marriage or a convent, she rides out for her own adventure. And what wanderlust she found! The prose and descriptions of vast Russia are beautiful. Arden interweaves world building and commentary so well you get swept away.

One of the few things I didn’t love was how much everything was Vasya’s fault. This death, that destruction, etc. She could’ve used a break, bless her heart. Vasilii the Brave is a heroine and deserved more praise under her guise.

The love tale woven throughout makes me giddy too. I look forward to more of Morozko and Vasya in the next book. This book isn’t heavy on the love either, and for a reader, I think that can sway them on way or another. I really appreciated the way it was set up. It stands apart from some novels too focused on the love. Vasya has so much loyalty and love for her family. It’s what makes the love with Morozko all the more sincere and tender.

Multiple POV helps you gain an understanding from many different characters. Vasya, Olya, and Sasha are a few on the group who get a momentary narrative. I always love when an author can handle so many characters at once because it enhances the story from all sides.

Can I almost mention MY LOVE FOR SOLOVEY? I want a magical horse that speaks to me. His fierce protection over Vasya gives me all the heart eyes.

I love the historical fiction aspect. Arden has degrees in Russian and tells the history and uses the aspects of names, times, and places to create a magic filled fantasy.

4 thoughts on “Review: The Girl in the Tower (Winternight Trilogy #2) by Katherine Arden”