I devoured another 31 books and can’t believe my eyes. I finished and caught up on series. Read a smattering of genres and really enjoyed my October reads!

How was your month? Do you have a favorite book you read? Lets talk in the comments!

The lovely Xandra at Starry Sky Books created and tagged me in my very first book tag! SO EXCITED. And this one is so clever and fun. Thank you for the tag!

Jude: A character who would probably kill you in your sleep.

Okay, so I’m quite confident any villain would kill me in my sleep. I’m too dangerous to have around in the first place. But for the questions sake, the Archivist of the Great Library would definitely have me taken out.

Cardan: A character who seems like a Bad Guy™ but is ultimately more complex than you thought.

I totally wrote in my review that I loved Cardan for this exact reason. So I had to think about a second character I feel this way about.

AH YES, HAN ALISTER. My little cinnamon roll who only wants love. He’s not a villain, or really that wicked, but everyone assumes he is. Alister is a complex, consorting mastermind who I’m so happy won in the end.

And hopefully that means Cardan wins in the end too.

Locke: A character (or plot twist) that made you want to throw the book.

My first initial thought was Allegiant. YOU ALL KNOW (and I honestly did actually throw this, and freaked my husband out). In interest of choosing a book I at least enjoyed with the plot twist:

Have you read this? Because if you have: YOU ALSO KNOW. I was gasping and freaking out. Didn’t throw the book per se, but you better believe I raged until KoA came out.

Taryn: A character who deceived you.

I finished reading this a few days ago and loved it, but Malachiasz from Wicked Saints totally deceived me!? I didn’t like him, then he grew on me, then he deceived me, and now I need the sequel. Need.

Vivi: A book that was significantly different from the others in its series.

I wrote my first true, snarky review about this book. I truly loved Everless. And I was very upset with how book two went down. The characters acted differently, pieces of the plot were forgotten, and plenty of other issues that were vastly different from the original.

Valerian: A character who just needs to die (or, you know, get stabbed).

I’m trying really hard to make sure I have a different series for each book so this one took some thinking because they’re so many people I think need stabbed if I’m being honest.

Dr. Hatch from the Michael Vey series is a top contender. Who takes in kids and makes them evil for his own gains!? This man of unlimited resources caused one to many problems for me.

Oak: A smol™ character you would protect at all costs.

Marya from The Winter of the Witch. I think that Vastya does a WAY better job of protecting her than I every could, but I love this little witch immensely.

The Cruel Prince: A book that surprised you with a twist.

I remember reading this book right before the hype really hit and exploded this into a movie. When I got to the flip in the book I had to re-read the page over a few times. DUDE WHAT JUST HAPPENED is putting it lightly.

The Wicked King: A book you thought was better (or worse) than the first in the series.

There’s a reason I read this multiple times a year. This is the pinnacle of sequels. I haven’t come across many “book twos” that hold as the best book in the entire series.

The Queen of Nothing: A book you’re excited for, but know nothing about.

THE BONE SEASON #4. I have no idea when this is coming out, and no idea what it will entail, but I am here for the wait. I got attached to this series in 2017 and am hoping it will continue soon since Shannon has finished her latest project.

There you have it! My first book tag. Totally a blast. I’m going to tag:

Please feel no pressure because I’m not sure if you’ve finished TCP/TWK yet! And anyone else who has, you’re totally welcome to do this too. The more the merrier! 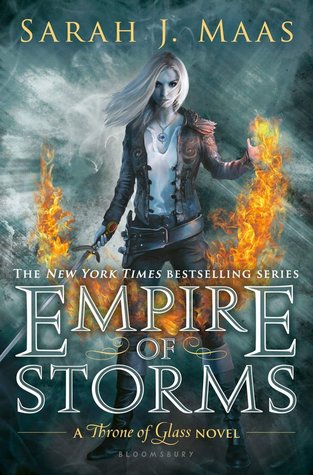 The long path to the throne has only just begun for Aelin Galathynius as war looms on the horizon. Loyalties have been broken and bought, friends have been lost and gained, and those who possess magic find themselves at odds with those who don’t.

With her heart sworn to the warrior-prince by her side, and her fealty pledged to the people she is determined to save, Aelin will delve into the depths of her power to protect those she loves. But as monsters emerge from the horrors of the past, and dark forces become poised to claim her world, the only chance for salvation will lie in a desperate quest that may mark the end of everything Aelin holds dear.

In this breathtaking fifth installment of the New York Times bestselling Throne of Glass series, Aelin will have to choose what—and who—to sacrifice if she’s to keep the world of Erilea from breaking apart.

Note: Review totally contains spoilers. I have read this series 3 or 4 times. I have no chill over this series. This is a re-read I’m doing specifically before KoA comes out in October.

I HAVE TOO MANY FEELINGS OVER THIS.

So you should join me in the comments to rattle the stars over this.

I stormed down the stairs after finishing this book *again* to exclaim my horror that AELIN IS IN AN IRON COFFIN. I mean, Maeve, come on now hunny, WHY WHY WHY. Imma come take you down my self when I figure out a way to literally go into a book world.

And my heart just BREAKS FOR ROWAN. His mate y’all. And she leaves, never expecting to return to Terrasen!??? Someone has to agree with me that there is no way Aelin, or Rowan dies right? The *dies* but *lives* stunt was pulled in her other series already so I’m thinking there must be a loophole to Elena’s problems. Seriously a case of “sounds like a personal problem”. *sighs*

Speaking of loopholes, HOLLIN. Did you forget Hollin? Because I did. Now I’m thinking he has to play a role somehow. At least I hope so.

I am thinking that Dorian might be the real sacrifice. I haven’t decided how I feel about this fact, but that’s where my inkling is leading me. He’s been darker since the Valg invasion, so I think this plays a part. Thoughts? The Gods are hell-bent on ruining someone’s life, why can’t we ruin there’s instead?

I’m also alllll over side characters in this book. Fenrys, he needs a hug. And someone to break him from that stupid blood-oath. His snarky, sassy self should get the freedom he deserves. I am seeing a Garvriel-saves-son-through-sacrifice as well. Someone’s gotta die. I’m just hoping it’s a sideish characters that won’t make me through a book across the room (thanks, Divergent series).

Also, totally in love with where Aedion and Lysandra are going. And Dorian and Manon. Okay, I secretly always hope that everyone gets a happy ending. Can’t help it. I need everyone to be happy so I’m happy. I hope they aren’t mates though. *side story*: I hope that NOBODY else has a mate. Perfectly content with others getting together/being in love/blah blah blah, but the mate thing is supposed to be rare. Rowan and Aelin have that, let’s let them have that.

Though now that I’m saying it, Lorcan should be Elide’s mate, IF ANYONE is going to have one. Lorcan’s character arc is still framing itself and I think needs a touch of Annieth, to bring him fully around. He’s already agreed to help in the end after BREAKING DOWN IN TEARS. He’s my favorite evil, broken soul. Elide is so strong and capable of doing more than she’s been allowed, and I appreciate so much she gets the opportunity to con, lie, and stand up for herself.

I do miss Dorian a bit in this book. I felt his part wasn’t really in here. This is making me thing he’s going to play a much bigger role in KoA. He’s on his own adventure with Manon now, so anything can happen at this point.

SJM ups the ante in her love scenes with this book. Definitely along ACOMAF lines. While I’m always pushing for a couple to finally come together, these scenes can definitely be a bit much. I prefer gloss-over/only slightly detailed scenes. Don’t let this deter you! You can easily skip them and not miss the story itself at all.

Language, and violence of course. VIOLENCE THAT WILL BREAK YOUR SOUL.